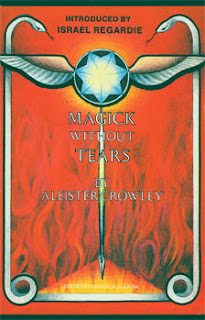 Selfishness? I am glad to find you worrying that bone, for it has plenty of meat on it; fine juicy meat, none of your Chilled Argentine or Canterbury lamb. It is a pelvis, what's more; for in a way the whole structure of the ethics of Thelema is founded upon it.
There is some danger here; for the question is a booby trap for the noble, the generous, the high-minded.

'Selflessness', the great characteristic of the Master of the Temple, the very quintessence of his attainment, is not its contradictory, or even its contrary; it is perfectly compatible (nay, shall we say friendly?) with it.

These are dead, these fellows; they feel not. We are not fo r the poor and the sad: the lords of the earth are our kinsfolk.
Is a God to live in a dog? No! but the highest are of us. They shall rejoice, our chosen; who sorroweth is not of us.
Beauty and strength, leaping laughter and delicious /anguour, fo rce and fire, are of us.
We  have  nothing  with  the  outcast  and  the  unfit:  let them  die  in  their  misery.  For  they  feel  not. Compassion  is  the  vice  of  Kings:  stamp  down  the wretched  and  the  weak;  this  is  the  law  of  the  strong: this  is  our  law  and  the  joy  of the  world.

This  is  the  central  doctrine  of  Thelema  in  this  matter. What  are  we  to  understand  by  it?  That  this  imbecile  and nauseating  cult  of  weakness-democracy  some  call  it-is utterly  false  and  vile.

P.P.P.P.S.  "But the A:. A:. oath;  aren't  you - we - all out to improve the race, not counting the cost to ourselves?" Pure selfishness, child, with foresight! I want a decent place to live in next time I come back. And a longer choice of first rate vehicles for my Work.