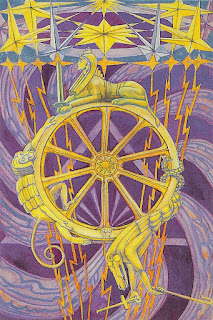 In this article I shall touch upon a rather sensitive topic in Thelema doctrine: reincarnation.

My aim is to share certain notions on the subject and to present quite compelling arguments that speak in favor of reincarnation - with one intention in sight: to discover the bottom line truth about reincarnation on our own by direct intimate insights beyond various scriptural notions.

There is an interesting and well referenced text on a related subject, written by Ben S. (Fr. IAO131) titled 'Death in Thelema'.

Before we move on, lets see some introduction remarks in the said text:

"Thelema does not have a conception of death like that of the Abrahamic religions (Judaism, Christianity, and Islam). There is no notion of a heaven or hell that is beyond this world. There is no notion of Judgment for our moral actions or beliefs. This much is clear to anyone who has performed even a cursory review of the Thelemic literary corpus.

Thelema also does not have a conception of death like that of the Dharmic religions (Hinduism, Buddhism, Jainism, and Sikhism). There is no notion of a desire to escape Samsara, the wheel of birth, death, and rebirth. There is also no notion of reincarnating in order to perfect the soul or achieve enlightenment throughout several lifetimes. This topic has been treated in a previous essay entitled “New Aeon Initiation” and Crowley has written, “The idea of incarnations ‘perfecting’ a thing originally perfect by definition is imbecile.” Thelemites see life and the world of duality as providing the opportunity for the “chance of union” (Liber AL I:29), to experience the joy of “love under will.”
- you can read the whole article here >> (a new page opens up)


Well, in the above text we can read interesting words by A. Crowley:  “The idea of incarnations ‘perfecting’ a thing originally perfect by definition is imbecile."

An interesting assertion for a man who himself has revealed his own past lives experiences. We can see that there indeed was a process of perfecting going on:


"We do, however, have information from Crowley’s diaries about his recollections of the half dozen or so prior incarnations during which he struggled with the Adeptus Major Grade. The record develops some interesting points. These can be summarized here only in the briefest way...

By the early 16th century, the being who later would incarnate as Aleister Crowley had attained to the 5=6 Grade of Adeptus Minor. The record then documents an incarnation as Edward Kelley (1555-1595), John Dee’s psychic assistant in bringing forth the Enochian system of magick. Kelley was strongly drawn to magick powers, and so sought to push ahead (prematurely) to 6=5. Furthermore, Kelley apparently did not embrace the new teachings the Enochian angels had conveyed to him, which were, in part, an early disclosure of the Law of Thelema.
As a result of this, he stepped back a grade in his next incarnation where, as a frail and malformed young man (subjected to ill health and abuse), he nonetheless lived a profoundly mystical life, obtaining a very high and pure mystical attainment by age 22.

There then followed two incarnations of failing in his attempt to assimilate the Geburah level of attainment.

First, he was a Russian called Father Ivan, profoundly steeped in magick, but laden with extreme vices, abusive of his magick powers, subject to rages, and author of horrible cruelties – all being extreme imbalances of the Gebu-ran energies.

Following this, he was a Heinrick van Dorn, an incarnation only partially remembered for reasons reportedly involving "some serious magical error connected with the grade of Adeptus Major," an abuse of black magical forces "in an entirely futile way. It is a tale of grimoires and vain evil rites, of pacts at which Satan was mocked, and crimes unworthy even of witches," Crowley wrote. He hanged himself at about age 27.

Following this suicide, he "passed through a dreadfully dark purgation," also described as "a profound horror and gloom." Upon completing this cleansing, he was born as Cagliostro (1748-1795). His karma having been equilibrated by his purgatory, Cagliostro reached a "very full" attainment of the 6=5 Grade. His blind spot in that incarnation, in his celebration of his mighty attainment, appears to have been a failure to see that something entirely Other lay beyond the Second Order – "not knowing or caring about the Abyss above me."

After Cagliostro, he incarnated as Eliphas Levi (1810-1875) who comfortably reattained the Adeptus Major Grade (summarizing his knowledge in The Dogma & Ritual of High Magic), then attaining the 7=4 Grade of Exempt Adept before his death."
- Chapter 10 (6=5 chapter) of The Mystical & Magical System of the A.'.A.'. by James A. E.


When I read the words of Master Therion above, I hear that he is referring to the ultimate identity of human being which indeed is perfect in itself.
(I wrote an article on the subject sometime ago, see the blog 'After Abyss II.: Changeless reality', here >>)

At the same time, however, that ultimate, changeless reality is not the only reality to consider. And taking human relative nature into consideration might be an intelligent thing to do. It is that relative human nature that is being perfected as it is plainly evident from the Master Therion's sequence of incarnations.

Leaving the Thelema doctrine aside for the time being, I would like to evoke the life long research work done by Ian Stevenson, MD. His field of research was reincarnation.

His detailed and well documented research results are interesting indeed. It is worth looking into his books, in my opinion; and what he basically shares therein is that many times there was a person A who died and after a certain time a person B was born at different place and remembered the circumstances of, in some cases, violent death of the person A.

There is well documented web site, 'Dr. Ian Stevenson's Reincarnation Research', offering a wealth of information on the subject of non-locality of human consciousness. You can visit the web site here >> (a new page opens up)

So, where do all of the presented notions leave us in regards to Thelema doctrine and reincarnation?

Well, as far as reincarnation is concerned, and considering the research results of Ian Stevenson and maybe personal insights into our own past, it gets quite difficult to disregard the whole concept.

And at the same time, with the Thelema as the empirical wisdom of the new Aeon in which focus is on the continuity of awareness, it might be equally difficult to disregard the notion of "...seeing life and the world of duality as providing the opportunity for the “chance of union” (Liber AL I:29), to experience the joy of “love under will.” .

The ultimate reality, which is so amply presented in many of the Thelema texts might as well be comprehended as something quite above and untouched by reincarnation...by those adepts that have done the Work and have Attained...