Crowley, the awakened one 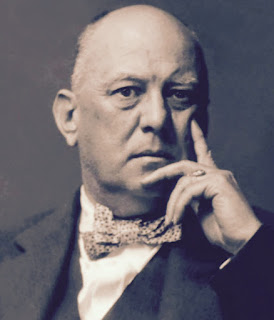 It is my observation that people in general just don't (or maybe can't?) understand or appriciate the depth of the work Crowley has done.

In my view, he really really knew what he was talking about - he was deeply realized individual. His written records attest to that (Liber LXXIII, comments to Liber B, and Liber AL, to name a few).

He was Awake in the broadest sense of the word.

I love how this exact sentiment was put into words by Karl Germer:


"Words are too weak to express the grief that has been upon me since the fatal news arrived by cable Tuesday morning. It is not so much the sorrow about Aleister’s death.

On that I feel rather a relief that His suffering, the suffering of his body, and his unfathomable loneliness during these last years has been ended at last. This loneliness has been deeper than possibly at any time during the many, many years since he has been awake. (I mean that in the sense of the “Wake World” etc. ) This loneliness is over, and as I see it, the very condition for his final attainment which He expressed in His cable to me of Nov. 18th. After that, it seems, there was nothing left to keep Him here.

But what grieves me so insufferably is that in retrospect I see how often, how very often during the years – over 22 now – that I have known Aleister, I placed obstacles in his path, I obstructed, and sometimes made his life hell for the man A.C. I thought I could make good during the months I thought I could stay with him from September to early December of this year. But the British who have crucified their greatest son, and who persecuted him with their hatred, have remained true to form to the very last by refusing me a visa, and though A.C. knew that the visit was not to be, and must not be, he felt the cancellation of my journey as a deep blow.

There is no secret about it that our relation had been from the start close and intense, closer than men generally can judge.

His Work, that was His Life, must and will continue and be brought gradually to the success and glorification that he should have seen during His earthly life."