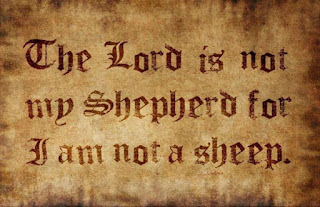 This article caught my attention on the Thelema FB group.

There will always be sheep that need a Shepherd, be that Jesus, Osho, Sai Baba, Buddha, Holy Bible, Liber AL or Crowley. It is just a phase in growing up, in my opinion.

It is interesting, though, how long this phase seem to last. Decades can go by without any real, deep and thorough progress simply because a "fateful true believer" donates his life energy to the Shepherd (head of the Order, Sacred Books, Prophets etc.) instead of, well, doing his own darn Will.

For Thelemic fundamentalists (I can’t believe I just wrote that), arguments are always self-referential: No results of the work that contradicts Crowley is even considered. Note how quick Thelemites are to cast stones at Christians while doing the same exact thing when there is nothing to support their arguments but the Bible. People have adopted, and proudly proclaimed the following mantra: “Crowley said it, I believe it, that settles it.” They act that way even when you quote Crowley to contradict them. Only their opinions count. Everyone else is wrong, stupid, doesn’t get it, or isn’t committed enough.

Any source material opposing Crowley’s position is disdained, and writers contradicting Crowley (or the huge list of writers and saints Crowley used to justify his position) are considered morons.

Attempts to challenge Crowley’s ideas are treated as antagonistic and followed by ad hominem attacks and huge assumptions to make you look bad in the face of their peers: “you think you know more than Crowley,” “you can’t accept his position due to your Christian values,” etc… even when those ideas are outdated and no longer applicable to our Work.

This is a great disservice to Thelema, since ignoring facts, whether natural, scientific, or psychological, can only serve to turn Thelema into a personality cult or superstitious mumbo-jumbo.

There is a lot of talk about free will and True Will, but apparently man is doomed to repeat the same mistakes over and over again, and this is nonnegotiable because, well, Crowley said so. This is disappointing for people who are more interested in using Thelema, its Magick, and the Holy Books of Thelema as a tool of discovery, rather than a history lesson on Crowley’s life.

Perhaps those people should have destroyed The Book of the Law after reading, for we are told by the Master himself:

“The study of this Book is forbidden. It is wise to destroy this copy after the first reading. Whosoever disregards this does so at his own risk and peril. These are most dire. Those who discuss the contents of this Book are to be shunned by all, as centres of pestilence. All questions of the Law are to be decided only by appeal to my writings, each for himself.”

Email ThisBlogThis!Share to TwitterShare to FacebookShare to Pinterest
Labels: fundamentalism, growing up, hga, k&c of the HGA, thelemic sheep