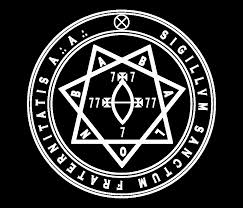 A post on the FB caught my attention, it is authored by IAO131 (Ben S.) and it deals with the True Self.
A few thoughts on the subject are arising and I am sharing them below.

Lets take a look at it first:

"The True Self never dies as it is beyond all limitation, containing all things and relations within Itself. The body along with the mind surely will expire but it is only through the mysterious mechanisms of this mind and body that the Self, beyond all limits and opposites, may become self-aware and consciously experience the rapture of existence.

This Self does not need to be redeemed or perfected: there is no Fall of Man to be rectified (Abrahamic religions) nor a Wheel of Suffering to be liberated from (Dharmic religions). There is even no sense of the soul incarnating to attain to higher and higher 'spiritual states' or towards 'enlightenment.'

In the New Aeon, the 'starting point' is not a fallen, suffering, and sinful state, but rather we are all Royal and Divine, Divinity-made-manifest, and 'existence is pure joy' (AL II:9) if it is seen with eyes that 'Bind nothing!' (AL I:22) i.e. eyes that see the unity underlying apparent dualities."
- Ben's web site >>)

Do what thou wilt shall be the whole of the law

True Self is described as something eternal, which never ever dies, is unborn and beyond space-time continuum.

The author of the above text points out that there is no need to redeem the True Self and no need to liberate it.
Well put indeed.

I would love bring this a bit further, though:

Not only that the True Self, our Ultimate Identity / Quality needs no redemption or liberation, it is perfect by Itself, eternally. No change can touch it, no wind can dry it, no water or fire influence it.

"The soul can never be cut to pieces by any weapon, nor burned by ﬁre, nor moistened by water, nor withered by the wind."
- Bhagavad Gita 2.23

It is forever the Same, ever Fresh and Always present Here and Now. It is the absolute Reality.

And being Absolute, every man and every woman that has experienced "The Star" so far, has experienced The Same Reality, no matter what Aeon in.
What else, for there is only One, having different names, but still only One.

I really do not want to rain on any parade here, but it is a rather superficial thinking that New Aeon brought some "New Reality", some new, upgraded and deeper version of the Absolute Self/Non-Self.
If that was the case, then it wouldn't really be Absolute, right?

Above the Abyss nothing ever changes, only the drama below the Abyss is different from Aeon to Aeon.

Granted, these high truths were always kept hidden from uninitiated men and women. Nowadays, however, even the top secret scriptures and techniques (Yoni Tantra and Yeshe Lama, for example) are available online even for free.

So, can we say that the 'dying god and the old Aeon' theory applies only to the relative reality, not to the Real (experienced for certain after Abyss)?

Can we agree that only the natural and eternal Star / True Self needs no redemption?

It is the "I am presence", the pristine and totally fulfilling state of awareness that is the Cause of everything. The Causal self.

It is already realized, it is already fully present. No need to develop it, or transform it into something Eternal by some mysterious alchemy and/or magickal process. It is already here.

It is not a matter of development or attainment, it is a matter of noting what already Is.

And it is Everything. Nothing apart from It possibly exists.

It takes a direct experience to realize that, for sure.

And it has always been that way. No New Aeon can change that. Beyond all symbols, and beyond even the most exalted sex rituals,
It is always the Same, nothing new to be gained, nothing whatsoever.

Masters of ancient times have realized IT, and while the time & space characteristics are changing and the New Aeon may indeed be the most suitable for not only realizing but also for expressing IT in dynamic and utterly positive fashion (which indeed IS new) -  IT   is   still   the   Same, beyond the waking state, dreams and dreamless sleep.


No religion can touch IT, no old or new ritual can come close to IT, not even Mother, Father or the Child can define it.

It is thoroughly Beyond, for it is non-dual with the Light, Life, Love and Liberty.

It always has been.

In our New Aeon it is just easier to attain, for:


Love is the law, love under will


See the next blog post in the After Abyss series: After Abyss (III.): total identity collapse >>

Back to Thelema and reincarnation, here >>