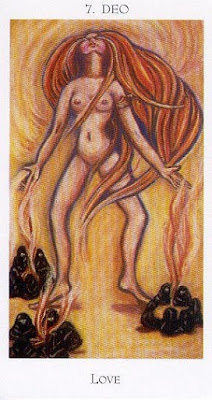 The notion that purity defines closeness to salvation is generally accepted in most spiritual traditions on this planet. Most Paths deny sensual pleasure, desires, attachments, sex etc.

Theravada Buddhists are not allowed to even see a woman when in retreat, for example.

Tantra, however, takes the opposite approach and embraces, well, everything, including sexual energy and bodily fluids.

Higher degrees in the O.T.O. also examine and employ the same.

Master Therion has had a lot of experiences along these lines and he shares his thoughts beautifully in the text below.

It is an interesting read and worth studying. I share here only the first two paragraphs, you can find link to the whole text at the end.

Energized Enthusiasm
A Note on Theurgy

I.
I A O the supreme One of the Gnostics, the true God, is the Lord of this work. Let us therefore invoke Him by that name which the Companions of the royal Arch blaspheme to aid us in the essay to declare the means which He has bestowed upon us!


II.
"The divine consciousness which is reflected and refracted in the works of Genius feeds upon a certain secretion, as I believe. This secretion is analogous to semen, but not identical with it. There are but few men and fewer women, those women being invariably androgyne, who possess it at any time in any quantity.

So closely is this secretion connected with the sexual economy that it appears to me at times as if it might be a by-product of that process which generates semen. That some form of this doctrine has been generally accepted is shown in the prohibitions of all religions. Sanctity has been assumed to depend on chastity, and chastity has nearly always been interpreted as abstinence. But I doubt whether the relation is so simple as this would imply; for example, I find in myself that manifestations of mental creative force always concur with some abnormal condition of the physical powers of generation. But it is not the case that long periods of chastity, on the one hand, or excess of orgies, on the other, are favourable to its manifestation or even to its formation.

I know myself, and in me it is extremely strong; its results are astounding. For example, I wrote "Tannhauser," complete from conception to execution, in sixty-seven consecutive hours. I was unconscious of the fall of nights and days, even after stopping; nor was there any reaction of fatigue. This work was written when I was twenty-four years old, immediately on the completion of an orgie which would normally have tired me out.

Often and often have I noticed that sexual satisfaction so-called has left me dissatisfied and unfatigued, and let loose the floods of verse which have disgraced my career.

Yet, on the contrary, a period of chastity has sometimes fortified me for a great outburst. This is far from being invariably the case. At the conclusion of the K 2 expedition, after five months of chastity, I did no work whatever, barring very few odd lyrics, for months afterwards.

I may mention the year 1911. At this time I was living, in excellent good health, with the woman whom I loved. Her health was, however, variable, and we were both constantly worried. The weather was continuously fine and hot. For a period of about three months I hardly missed a morning; always on waking I burst out with a new idea which had to be written down. The total energy of my being was very high. My weight was 10 stone 8 lb., which had been my fighting weight when I was ten years younger. We walked some twenty miles daily through hilly forest. The actual amount of MSS. written at this time is astounding; their variety is even more so; of their excellence I will not speak.

Here is a rough list from memory; it is far from exhaustive:

(1) Some dozen books of A.'. A.'. instruction, including liber Astarte, and the Temple of Solomon the King for "Equinox VII."

(3) Plays: His Majesty's Fiddler
Elder Eel
Adonis . written straight off, one
The Ghouls. after the other
Mortadello.

(4) Poems: The Sevenfold Sacrament
A Birthday.

(5) Fundamentals of the Greek Qabalah (involving the collection and analysis of several thousand words).

I think this phenomenon is unique in the history of literature. I may further refer to my second journey to Algeria, where my sexual life, though fairly full, had been unsatisfactory.

On quitting Biskra, I was so full of ideas that I had to get off the train at El-Kantara, where I wrote "The Scorpion." Five or six poems were written on the way to Paris; "The Ordeal of Ida Pendragon" during my twenty-four hours' stay in Paris, and "Snowstorm" and "The Electric Silence" immediately on my return to England.

To sum up, I can always trace a connection between my sexual condition and the condition of artistic creation, which is so close as to approach identity, and yet so loose that I cannot predicate a single important proposition.

It is these considerations which give me pain when I am reproached by the ignorant with wishing to produce genius mechanically. I may fail, but my failure is a thousand times greater than their utmost success.

I shall therefore base my remarks not so much on the observations which I have myself made, and the experiments which I have tried, as on the accepted classical methods of producing that energized enthusiasm which is the lever that moves God.

Read the whole text here >>
(a new page opens up)